When many of the cast members of some best loved Friday the 13th movies gathered in Virginia Beach in November of 2012 for the second Blood at the Beach Horror Convention, we were there to bring you the following report on what it was like creating the legacy of Jason Voorhees and helping to make a scary hockey mask synonymous with the infamous date!

Most people tend to forget that Jason did not actually show up and start slashing teen victims until Friday the 13th Part II, which was released in 1981 as the first of many sequels to the 1980 landmark original.

The first adult actor ever to portray the now-iconic killer Jason Voorhees in a Friday the 13th film was former soap opera hunk Steve Dash, who wore a sack with one eye hole in it over his head while he was slicing and dicing the nubile new counselors at Camp Crystal Lake in the first sequel.

The most prolific actor to ever play Jason is horror icon Kane Hodder, who donned the hockey mask in four different sequels, from Friday the 13th Part VII: The New Blood through the 10th installment, Jason X.

Dash and Hodder joked with each other plenty over who was the better Jason during a lively Q&A session at Blood at the Beach, where they were joined by Jason’s first two “survivor girls”, Adrienne King of the original Friday the 13th and Amy Steel of Part 2, as well as Ron Millkie, who played Officer Dorf in the first film.

“We all know you’re the real Jason,” Hodder told Dash, who later joked back, “Someday you’ll grow up to be just like me.” 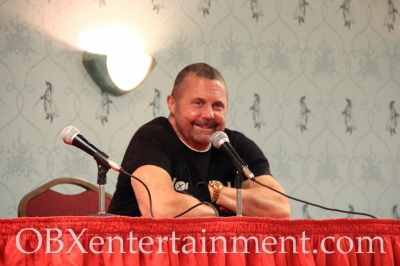 Kane Hodder at the ‘Friday the 13th’ panel at Blood at the Beach, Nov. 11, 2012 in Virginia Beach. (photo: OBXentertainment.com)

Millkie said he knew a young Kevin Bacon would go on to do big things in Hollywood following his memorable death in the original film.

“Even in filming that scene,” said Millkie, “I knew he (Bacon) was going to go on to do something, because he was such a good actor. We had rehearsed it once and (director) Sean Cunningham said ‘Okay, we’re going to shoot it.’ All of a sudden, Kevin starts going towards my motorcycle. This is not in the script. So I go over there, and it was one of the best moments of the scene because it was completely spontaneous.”

Millkie said he was the last one to join the cast, as Cunningham had originally intended to play the part of the motorcycle cop himself before Ron saw an ad and called the director to ask if he had a role for him after production had started and subsequently got the part after a late on-set audition. 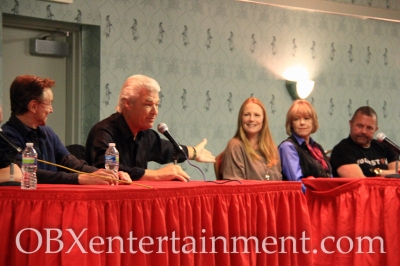 “I got a call from the stunt coordinator on Friday the 13th Part II,” said Dash. “He said, ‘I’m here in Connecticut and I’m doing this film called Jason. They guy that they hired to play Jason is no good. He’s afraid to go through a window, so we got problems. We need you for Jason.’ I said, ‘Holy shit, I got the lead role in the film.’ I got very excited. I didn’t have any money, so I borrowed 50 bucks from my brother to drive up to Connecticut.

“It was 1981 and the Screen Actors Guild was on strike and nobody had been working, but they let them shoot this film because they agreed with Paramount that whatever the settlement would be they would pay it residually. So they let them continue to shoot.

“I got there that night and they met me, they said, ‘He looks good. Take him to wardrobe and see if it fits.’ I went into wardrobe and they gave me the coveralls and the shirt and I came back out, and (director) Steve Miner said, ‘Get the sack.’ I said, ‘They’re going to put a sack over my head? You mean nobody’s going to see my face?’ He said, ‘No, at the end of the movie they take the bag off and there’s this hideous face, but the other guy that they fired has the hideous face.’

“I needed the job, so I said, ‘Okay give me the script,’ and he said, ‘You don’t need a script. All you do is kill kids while they’re having sex.’

Amy Steel and Adrienne King at the ‘Friday the 13th’ panel at Blood at the Beach, Nov. 11, 2012 in Virginia Beach. (photo: OBXentertainment.com)

Amy Steel says she only recently learned that she actually hurt Dash during filming certain scenes.

“Steve tells me now that I broke his ribs,” she said. “With all that adrenaline as an actress, I just couldn’t control myself. I also put the machete through his finger and he just showed me the scar.”

“It’s 13 stitches in this finger,” Dash interjected. “They thought the movie’s name was Jason, but they put in 13 stitches.”

“I just remember thinking, ‘I can do this, I can do this’,” remembered Steel. “We count to three and he’s supposed to turn with the pick ax. Well, I got to two and I swung. He had to go to the hospital. I felt really bad because I think they should’ve had a rubber machete there, but what can I say? He’s a stunt guy, he loved it.”

“Amy didn’t talk to me through the whole filming,” added Dash. “The first time I talked to her was 30 years later at a convention.”

Hodder commented, “Being a stunt guy for 35 years, the scariest thing we do is when we’re told that we’re going to do a fight scene with an actor or an actress, because they over amp in fight scenes. If you’re ever going to get punched in the face accidentally, it’ll be by an actor.”

Amy Steel and Adrienne King at the ‘Friday the 13th’ panel at Blood at the Beach, Nov. 11, 2012 in Virginia Beach. (photo: OBXentertainment.com)

Adrienne King of the original Friday the 13th, recalled getting the role of Alice.

“They saw every single actress in New York City under the age of 30,” she said. “They had an open call. I was a SAG (Screen Actors Guild) member, but I did not have a theatrical resume. So I lined up like the rest of them. I think my number was 313 out of 3,000 that day.

“All of us were truly New York actors who had really done our bit of Off Off Off Broadway stuff and everything that you can possibly do as a young actor trying to build up your resume. It was essentially over the course of about five weeks of call backs after call backs. You didn’t know what character you were reading for. Everybody read for everybody. I got down to the point where I made it through and they had to choose Alice.

“They had a bunch of us come back for a screen test and I screamed my bloody lungs out. Sean called me later that day and said, ‘You’re my Alice.’” 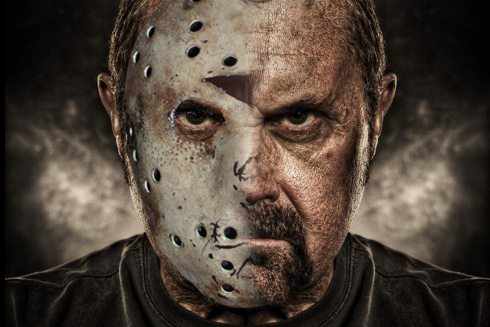 Hodder said he got the role of Jason in Friday the 13th Part VII thanks to a successful relationship with director Renny Harlin, who he had worked with the year before on a film called Prison, who liked Hodder’s enthusiasm for makeup effects and how he worked in it.

“He (Harlin) was hired and immediately said, ‘I want this guy to play Jason’,” recalled Hodder. “There had been six guys previous that hadn’t repeated, so they weren’t above trying another new guy, but I had to do a screen test. So I went and adlibbed a bunch of stuff on film with a stunt guy that I brought with me. I threw him over a table and dragged him by his hair literally and just tore him up, and they liked what I did, so they said, ‘You got the part’.

“I remember getting a message on my machine that said, ‘Hello, Mr. Voorhees.’” 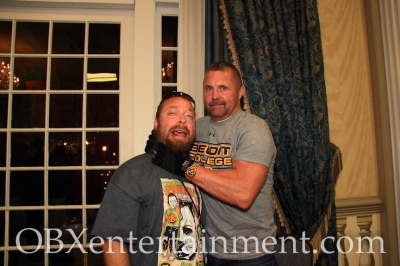 When the following installment took Jason to New York City, Hodder became the first actor in history to play the role in more than one film.

“With Manhattan,” he said, “it happened the next year, and I thought I’d love to play the character again. I called an executive at Paramount and told her, and she goes, ‘Oh, you would? We didn’t think you’d want to.’ I think if I didn’t make that phone call I may have been replaced.

“It was very amazing to be in the entire costume, mask on, standing in the middle of Times Square at 10 o’clock at night shooting a film. There was hundreds of people watching, held back by barricades.

“Once I did it twice, then Adam Marcus on Jason Goes to Hell just liked what I had done, so he immediately wanted me to do it, and so did Jim Isaac when he directed Jason X. When it came to Freddy vs. Jason, I had a meeting with the executives at New Line. They gave me the script and said, ‘We’re doing the movie finally,’ and I said, ‘Fantastic, I’m very excited.’ Then they hired a director and I was gone for no apparent reason.

“I considered it an honor to put that hockey mask on, because everyone knew the character. Now I was the one wearing the mask? That’s unbelievable to me. All I tried to do was maybe make him a little more lifelike.” 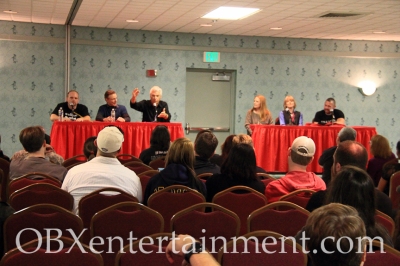 “On the first one,” added King, “we didn’t even have enough money for a stunt coordinator. That last scene on the beach, Betsy Palmer and I totally were choreographed by Tom Savini and Sean, so I have Sean Cunningham’s original director’s notes.

“We were totally bruised and bloodied.”

“As the sun is coming up,” King continued, “Sean has the audacity to take those notes, crumple them, and toss them into the garbage, and I grabbed those notes. They’re really quite fascinating. I found them 25 years later in a taped up box.”

On the undying longevity of the franchise, its original leading lady King says, “It’s about the fact that the actors truly embraced the characters and made them believable, otherwise who cares if anyone gets killed.

“You care. That’s why this film is still here. That’s the difference. It became iconic because it reads true on so many levels.”

Dash even says that he knows how the famous red and white hockey mask came to become synonymous with Jason from the third film on.

“When they were putting the bag on me every day,” he explained, “they taped the bag to my face so I could see without a problem. It worked great, but the problem was we were shooting for three weeks, and from taking the tape on and off every day, I developed burns. The producers claim they thought up the hockey mask, but I think they didn’t want to have to go through that again with Jason getting burned.”

Steve Dash as Jason Voorhees in ‘Friday the 13th Part 2’.

For the record, Hodder’s favorite kill in the entire series is when Jason slams a teenager trapped inside a sleeping bag against a tree, while Dash prefers Jason implanting a machete into the head of a handicapped young man who is then sent rolling backwards down a flight of stairs.

So who is the greatest Jason of all time?

“I’ve always maintained that the ultimate Jason is Kane Hodder, without a doubt,” stated Dash. “But the real Jason is me.” 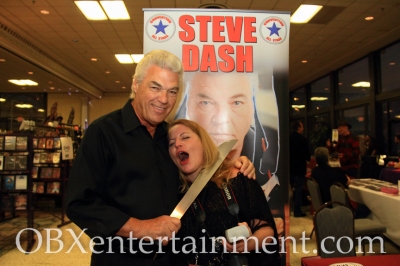 For the first time, Spirit Halloween has unveiled a surprise post-Halloween bonus release for 2020, today revealing a brand new