The new Wrong Turn reboot is an effective reimagining of the six-film franchise that started with the 2003 original of the same name, but aside from the similar frame of a group of attractive young people getting lost in the woods and encountering the menacing residents living within, this is an entirely different and far more timely breed of horror.

The film plays with our collective expectations, both as a horror fans in general and as fans of the original Wrong Turn, and then successfully subverts those expectations, more than once, to deliver something that is every bit as scary but much more twisted, ambitious, and even challenging. It forces viewers to question who the real “bad guys” are and, further, if we are in the wrong for seeing them as such.

You think you know how this will all play out, but you will be surprised, and it’s those surprises that elevate this movie above its predecessors within in this franchise and within the larger “evil locals in the woods” subgenre.

This new story starts with a father, played by Mathew Modine, searching a small Virginia town for this daughter, who we learn immediately has been missing since going hiking with five of her friends six weeks ago. From there, we flash back to six weeks earlier to see what happened to his daughter Jen, played perfectly by Charlotte Vega, the only one of her twenty-something friends who has not yet figured out what she wants to do with her life.

Once the group makes their fateful decision to go off the marked Appalachian Trail to look for an abandoned Civil War fort, it doesn’t take long for the horror to begin, and it is relentless, both in unflinching gore and white-knuckle intensity. When the first among the group is killed, the other characters start spiraling in different directions before we are introduced to The Foundation, a group of a dozen families who have lived in isolation “up the mountain” for generations since before the Civil War, which they saw coming and is why they began their entirely self-sufficient community, all so they are ready to be “the foundation on which a new nation would be built.”

The people of The Foundation have little in common with the inbred cannibals that the kids of the 2003 film faced in the woods, but they are no less brutal and unforgiving when it comes to dealing with trespassers.

I won’t spoil the surprises that follow here, but I loved every decision the filmmakers made, and the incredibly satisfying final sequence is seared into my brain as I write this review.

The new film is written by Alan McElroy, who created the franchise when he wrote the original Wrong Turn (starring Eliza Dushku). He also wrote 1988’s Halloween 4: The Return of Michael Myers, and has worked in more recent years on hit TV shows including The Vampire Diaries, Star Trek: Discovery, and Jack Ryan. The new direction McElroy takes in the reboot is laced with poignant social commentary about the real America and all of its with-me-or-die division that we see today, but it’s not simply telling you what’s right and wrong, but encouraging you – daring you even – to look deeper and question why you feel that the other side is the enemy.

Vega absolutely kills it as Jen, earning her horror stripes in one fearless, epic performance, while Modine reminds us why he was an above-the-title leading man well before most of this cast was born, again subverting expectations as a father who will stop at nothing to find his daughter. As director Mike P. Nelson says in his commentary track, “It’s a father searching for his daughter, so the stakes don’t get much higher than that.”

Daisy Head is at once both alluring and disturbing as Edith, one of the few members of The Foundation to venture “below the mountain,” and Bill Sage is a formidable and imposing presence as Venable, the leader of The Foundation.

With a runtime of almost two hours, none of that time is wasted, as Nelson makes sure to allow for extra emotional beats that elevate Jen and her friends from disposal characters to people we care about.

The Blu-ray and DVD both include a collection of six deleted and extended scenes, a brief promotional video filmed with Nelson on set during production, and a well-made approximately 25-minute behind-the-scenes featurette called “Monsters Among Us: Making Wrong Turn“, with Nelson and McElroy discussing what sets this film apart from its predecessors in the franchise and why certain decisions were made. Vega, Modine, Sage, and the rest of the primary cast also talk about how their characters are unique compared to the mostly-forgettable characters we have come to expect in too many genre films.

The best of the bonus material included here, however, is definitely the feature-length audio commentary with Nelson. While far too many physical disc releases have arrived with minimal (if any) special features, it has become increasingly rare for filmmaker commentary tracks to be included recently, a sad fact for those of us who cherish and look forward to those commentaries, and so it’s commendable to both the producers and Lionsgate for opting to include this invaluable bonus that fans of the franchise and new viewers alike will absolutely eat up.

Nelson freely admits his nervousness and excitement to record his first director’s commentary. This is only his second feature film, and I’ll be following his career with great interest to see what he does next.

In the commentary track, Nelson explains how he and cinematographer Nick Junkersfeld used different camerawork in the woods, using spherical lenses to keep it visceral and intense, extra grainy and unpredictable, versus inside The Foundation, where they switched to anamorphic lenses to really create more of a controlling atmosphere with lots of lock-offs and steadicam work subliminally illustrating the hard rules and structure of The Foundation.

Early on, there’s a chilling Nosferatu homage, scripted by McElroy, featuring Haunt‘s Chaney Morrow, who slithers around as Hobbs, one of The Foundation’s finest. And another Haunt alum, our friend Damian Maffei (The Strangers: Prey at Night) gets to take off his mask and really exhibit his superb acting chops in a brief but great scene in which he actually learned the little known language of Faroese (from the Faroe Islands) that is spoken by The Foundation and is able to invoke so much pathos into what could have been a simple monologue that it’s kind of the best moment in the movie.

I love that McElroy’s script poses some serious questions and doesn’t offer any easy answers, but it stays with you, rattling around in your head long after watching the film.

It cannot be overstated enough how impressive it is for a seventh film in a franchise to surprise its target audience, but this movie does just that, making Wrong Turn the rare reboot that gets it right.

Wrong Turn is out now on DVD and on Blu-ray (+ Digital), from Lionsgate.

You can watch the official trailer and view the cover art below. 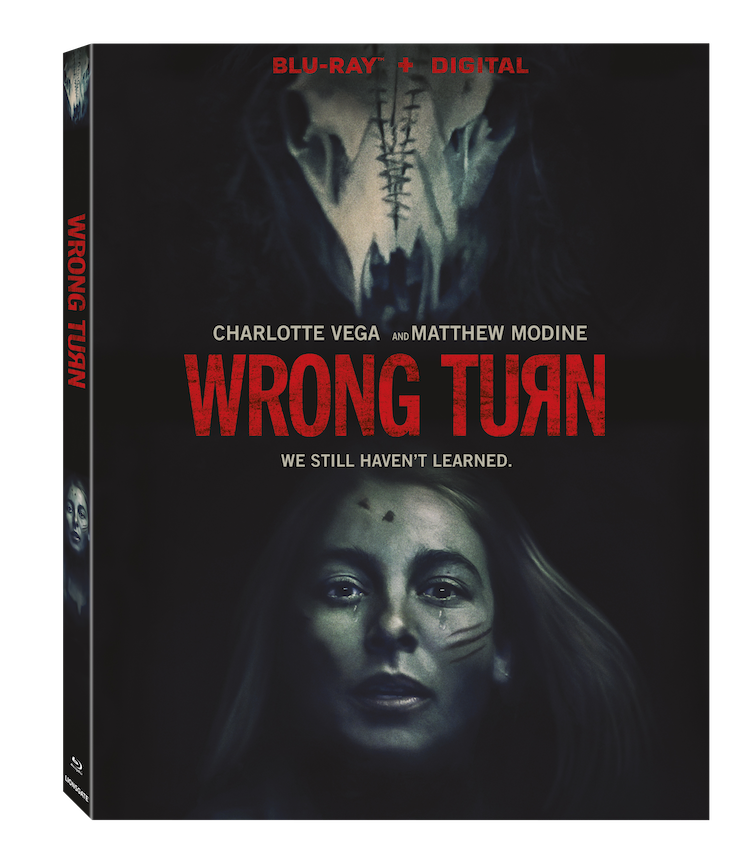